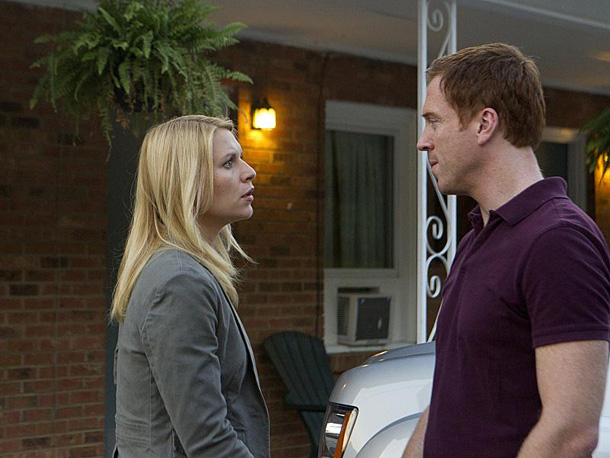 This week’s episode of Homeland delved into the guilt felt by Dana about the hit and run that she took part of. In her time of turmoil, she turned to Mike for help.  Earlier on in the series, I had a small  dislike for Mike’s character. He has begun to grow on me now though.  He seems to genuinely care about the family and misses them. Hopefully there is a place for him in the family, sometime in the future. When I say that, I don’t  necessarily mean as a love interest with Dana’s mother. Fatherly figure seems more suitable for him, after all he has done for Jessica.

Meanwhile, it seems that all the lies and deception in Sgt. Brody’s life is finally taking a toll on him . His life as a double agent has forced him to make hard decisions that leaves his daughter angry with him. When his wife Jessica confronts him about lying about Carrie being out of the CIA, it can only get worse. All this pressure is causing him to lose his will to continue. I feel sorry for the guy. His family is falling apart despite his best intentions.

Because of these feeling, Brody ruins his meet up with Roya Hammad. If only it was that easy. If only he could walk away. But It isn’t that easy. The C.I.A needs him and without Brody as an asset, he’ll probably be spending some time in Guantanamo Bay(A thought he considers to be not all that bad if he can just stop all the lies). Still, the cogs turn and Carrie is still in play. After all, a threat is imminent. Carrie takes matters into her own and takes Brody off the radar. She convinces him that all his sins will be forgiven if he becomes this hero, who stops this attack on the U.S . Even the sins, against her she tells him will be forgiven.  All this eventually leads to them making sweet,sweet, love which is hilariously and masterfully cut into Saul and Quinn listening in.

It’s hard to tell whether Carrie is getting too attached with Brody, or if she is just doing it for the job. Saul shows his disapproval and asks her about it but she shoves it off as just being part of the job. Time will only tell how genuine Carrie’s feeling are towards Brody. Meanwhile, Brody sets up another  meeting with Roya Hammmad. Roya drives Brody out to the middle of nowhere and in a change of events her and the man from the Gettysburg massacre drags him out to a grass field where a helicopter is in the wait. It takes Brody off the radar for good. But unfortunately, this time he isn’t off the radar in the safe hands of the C.I.A. He’s now off the radar, in the hands of Abu Nazir.

I predict we will see in the next episodes of Homeland, whether Abu Nazir still has an effect on Brody. Will his memories of Issa, take him back to the other side? Only time will tell. I for one am looking forward to a conflicted Brody who can’t see right from wrong.