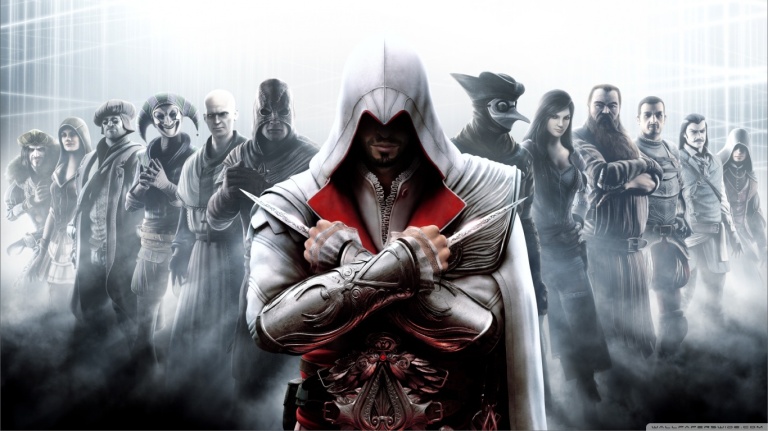 Assassin’s Creed is one of those games that you go into not expecting to spend much time. Unfortunately, you get dragged into the the side missions and scavenging that you start to forget how much time you’re spending.  The game starts off slow but the later levels starts to really pick up. When you do get to those later levels it’s some really satisfying game-play which force you to use several stealth mechanics. The game’s shining improvement is it’s implementation of a Assassin’s Guild which is a surprisingly deep system. In this system, you can recruit and train assassins to fight for you anywhere and send them on contracts around the globe to gain experience. The more territory in Rome you acquire the more assassins you are allowed to recruit.

Though the main missions of the game had many fillers it was still interesting enough to keep me going. I found that scavenging for lost glyphs and listening to the audio recording on them equally engrossing. Finding out information about the Illuminati-like organization known as Abstergo offers some thought provoking commentary on capitalist governments, consumerism, and privacy. Sadly, a lot of the material seems chillingly familiar to U.S policies. One gripe I had with the game is that there isn’t any option to change difficulty. This is a big gripe for me because I usually play my games on hard difficulty and this game seemed too easy at some points especially when you have assassin’s that can do most of the fighting for you. After beating the game, Brotherhood will still have plenty replay value. You will most likely have plenty of guild missions to keep you occupied for several hours and there is also an extra romance mission to wrap things up for Ezio.

If you haven’t played it yet, I would recommend you to pick this thing out of a bargain bin. It’s well worth it. It should be dirt cheap at this point. I bought mine for 8 bucks at Gamestop.