I’ve heard rumblings of this film through the most bizarre of places. I was in search of a horror film and came across an off-hand comment that swore by the statement that Threads was and continues to be, in his memory the scariest movie he had ever scene.

After a little research I discovered an avid fan-base for the movie with similar thoughts regarding the nuclear holocaust drama. Threads is a film that depicts the immediate aftermath and continuing effects that a nuclear war would have on city. 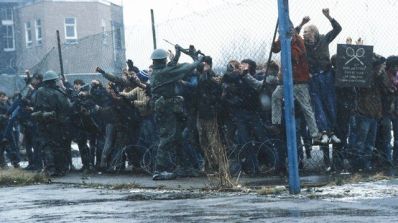 I jumped into the film with a little hesitation. How could a film with these topics be considered essentially horror. The film portrays a world in political turmoil and on the brink of catastrophe. It takes an up close and personal look at a small group of people as they experience nuclear annihilation. The film displays a step by step thorough  documentary style and disturbing breakdown of the events with incredible effect.

Threads is a relentless depiction of societal breakdown. I found it particularly potent how the film illustrated the futility of keeping order in a world of destruction and chaos. One arc in the film follows a group of public servants responsible for administering aid and support during and after the event. You can almost taste the fear as they experience the same sense of dread as those outside their fortified bunker. Then as the audience you you have to witness the same ones responsible for allowing the world to continue to move forward meet their slow and painful deaths.

I can only fathom the way kids growing up during the cold war may have felt experiencing a film such as this. As the doomsday clock ticks closer and closer to the brink of annihilation, a drama style documentary releases, preying on everyone’s current fears. The imagery of the film is shocking but ultimately forces you to examine what an event of this magnitude would actually entail. One scene in the film is particularly striking as the bombs begin to fall and all hell breaks loose. A character in the film stares up at the looming mushroom cloud and says in the most defeated and fearful way, “Jesus Christ, they’ve done it.”

After the end of the film, I thought deeply of what I would do in a world like this. I thought of how unprepared personally and as as people we are for something like this. Where would I go? Where would I meet my loved ones?  How could anyone survive in a world where every scrap of food is the difference between life and death. How does a government decide who should live or die with massive food shortages? The tag line for the film is “The closest you’ll ever want to come to nuclear war”. This sentence is pretty much a spot on endorsement. What defines a “scary” film? Threads is a film that gnaws at our inner fears and exposes the ever-present depravity of human nature. If this realistic living nightmare brought to the screen isn’t horror, I don’t know what is.

Review: Threads is a profound film that shouldn’t be missed.